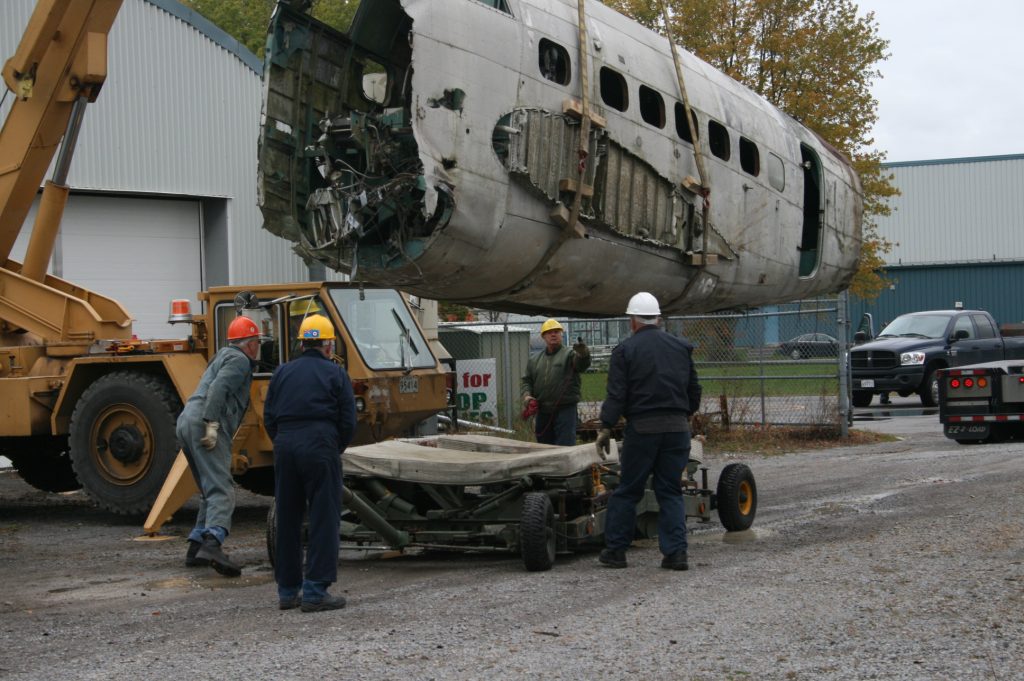 The National Air Force Museum of Canada (NAFMC), in association with the Atlantic Canada Aviation Museum (ACAM) in Halifax, and with the assistance and generosity of the Reynolds Museum Ltd., is restoring a 1942 Mark VI Lockheed Hudson, Serial Number FK466.

The NAFMC started work on this demanding project in October 2010. When restored, FK466 will represent a significant aircraft in the history of Canada’s Air Force and it will be the only Mark VI Hudson on display in the world. FK466 is not a complete aircraft, as it was cut up upon disposal from “War Assets” after WWII, and it requires numerous items including interior furnishings, cockpit instruments and engines. In addition, finding manufacturer’s drawings and blueprints is another priority for the Restoration Workshop team. Restoration time for FK466 is estimated at five to ten years to complete.

Restoration of the Hudson is on hold, waiting for Pratt & Whitney 1830-69 radial engine mounts and cockpit instruments.

General History of the Lockheed Hudson

The Lockheed Hudson was an American-built light bomber and coastal reconnaissance aircraft built initially for the Royal Air Force (RAF) shortly before the outbreak of the Second World War and primarily operated by the RAF thereafter. The Hudson served throughout the war, mainly with Coastal Command, but also in transport and training roles, as well as delivering agents into occupied France. They were also used extensively with the Royal Canadian Air Force’s (RCAF) anti-submarine squadrons. 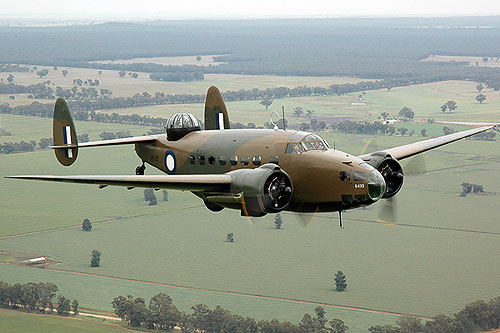 In late 1937 Lockheed sent a cutaway drawing of the Model 14 Super Electra to various publications showing the new aircraft as a civilian aircraft and converted to a light bomber. This attracted the interest of various air forces and in 1938; the British Purchasing Commission sought an American maritime patrol aircraft for the United Kingdom to support the Avro Anson. On 10 December 1938, Lockheed demonstrated a modified version of the Lockheed Model 14 Super Electra commercial airliner, which swiftly went into production as the Hudson Mk I.

By February 1939, RAF Hudsons began to be delivered to No. 224 Squadron RAF at RAF Leuchars, Scotland. By the start of the war in September, 78 Hudsons were in service. Due to the United States then-neutrality, early series aircraft were flown to the Canadian border, landed, and then towed on their wheels over the border into Canada by tractors or horse-drawn teams, before then being flown to RCAF airfields where they were then dismantled and “cocooned” for transport as deck cargo, by ship to Liverpool.

Although later outclassed by larger bombers, such as the Halifax and the Lancaster, the Hudson achieved some significant feats during the first half of the war. On 8 October 1939, over Jutland, a Hudson became the first RAF aircraft to shoot down a German aircraft. They also operated as fighters during the Battle of Dunkirk. A Hudson of RCAF Bomber Reconnaissance Squadron 113 became the first aircraft of the RCAF’s Eastern Air Command to sink a submarine, when Hudson 625 sank U-754 on 31 July 1942.

In all, a total of 2,584 Hudsons were built. They began to be withdrawn from front-line service in 1944. Some Hudsons were converted to civil transports after the war, and the Hudson formed the basis for the development of the Lockheed Ventura.

Thus far, we have been able to determine the following information about this particular historic aircraft:

It is a Lockheed Hudson Mk. VI, with Royal Air Force (RAF) Serial Number FK466, and it was built at Burbank, California, in September 1942. It was a Lend-Lease aircraft, and it was part of one of the last batches of Lend-Lease Hudsons. The Hudson was equivalent to the USAAF Model A-28A.

The A-28A was a contract designation given to 450 Lockheed Hudson twin-engine attack aircraft intended for delivery to British Commonwealth countries under Lend-Lease agreements. The A-28A (Mk. VI) was essentially an improved version of the earlier A-28. One significant difference between the A-28 and A-28A was the upgrade to the Pratt & Whitney 1830-69 radial engine, a more powerful version with 1,200 hp each at maximum takeoff power.

Most A-28As were sent to Great Britain and served in the RAF in various missions. Some also served with the Royal Canadian Air Force (RCAF) and Royal New Zealand Air Force (RNZAF). A few aircraft were retained by the USAAF for use as staff transports.

On August 8, 1944, FK466 was then transferred from the BCATP to the War Materials Office as “War Reserve,” at No. 21 Repair Depot, Moncton, New Brunswick, pending modification to Air Sea Rescue (ASR) configuration.

As part of the ASR conversion, FK466 was equipped with an Uffa Fox, Mk. I, Airborne Lifeboat. These boats, which were mounted under the aircraft’s fuselage, were equipped with two gas engines, one sail and emergency rations.

FK466 was then transferred back to Eastern Air Command on December 12, 1944, after conversion 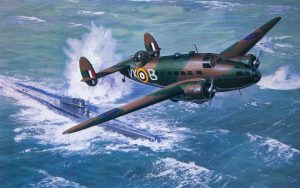 to the ASR role. FK466 was now attached to No. 1 (Composite) Squadron based at RCAF Station Torbay, Newfoundland. No. 1 Composite Squadron had been formed to provide target towing, search and rescue, and communications duties as part of Eastern Air Command. No. 1 Composite Squadron’s diary indicates that on April 17, 1945, Flying Officer (F/O) McKay dropped a dummy lifeboat from FK466 over Quidi Vidi Lake, near St. John’s, Newfoundland.

The Air Sea Rescue element of the squadron, which included FK466 and other aircraft and personnel, was transferred to the control of RCAF Station Torbay, when No. 1 Composite Squadron was disbanded on July 7, 1945. The Air Sea Rescue Flight operated for about two months using Hudsons FK466 and FK495.

The lifeboat system was utilized on July 6, 1945, when an Airborne Lifeboat was lowered to the crew of a B-24D Liberator from RCAF #10 Squadron, Tail Number 595, which had ditched in the Atlantic off Newfoundland, after experiencing flight control problems. Whether FK466 or FK 495 carried out the lifeboat drop is currently unclear, but we are working on that mystery.

FK466 was purchased from War Assets, along with a number of B-24’s and other Hudson’s, by Mr. Pat “Airplane” Murphy, who was in the scrap metal business in Berwick, Nova Scotia. He cut off the wings in order to make transporting the aircraft easier, and then cut off the nose section to make storage easier in his scrap yard. Over the years, various parts and pieces from all of these aircraft were sold as scrap metal or for use by area locals. Mr. Laurie Layton, of L.W. Layton Salvage, in Canning, Nova Scotia purchased FK466 from Mr. Murphy in 1980 for $175. It remained at L.W. Layton Salvage as a dismantled hulk from 1980 to 1988. FK466 was subsequently found and acquired by ACAM members and transported to Halifax, Nova Scotia in 1988, where it has remained until October 2010, when it was moved into the restoration shop at the NAFMC. 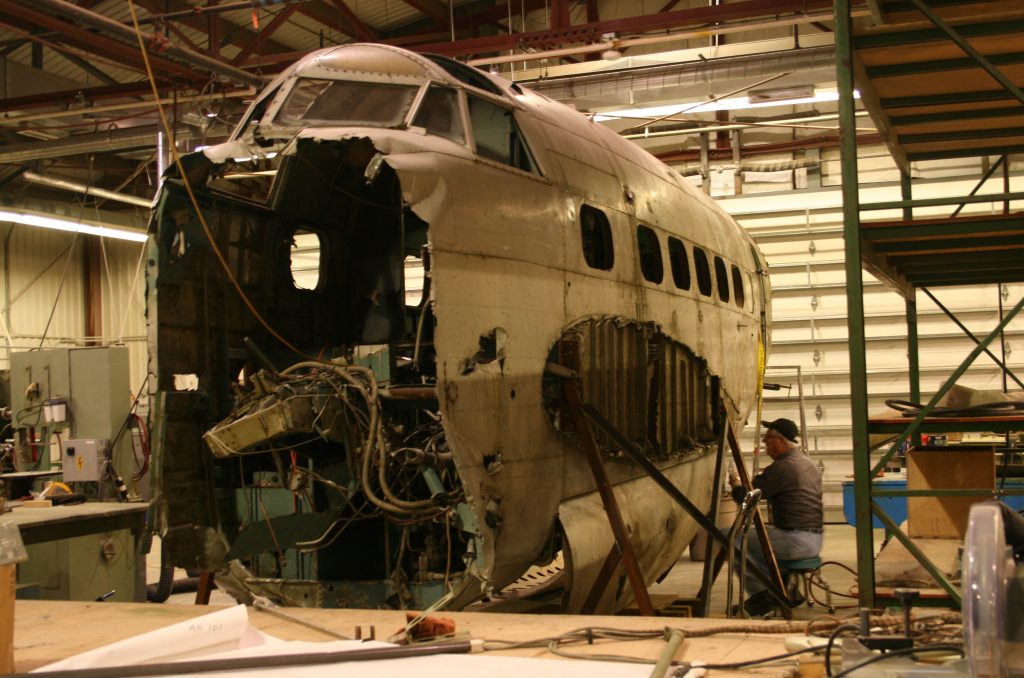 The contribution of our dedicated volunteers in the restoration and preservation of our aircraft cannot be overstated. Our volunteers come from all walks of life and most are retired from their previous careers. We are also very fortunate to have a volunteer who was not only a Hudson pilot during the WWII, but he also flew this very aircraft!

Anyone who is interested in volunteering as a member of the Restoration Workshop Crew (especially persons with metal work experience), or having additional information or details about these aircraft or the bases or squadrons that form part of their history, is encouraged to contact the National Air Force Museum of Canada directly at (613) 965-2864 or by email to: restoration@airforcemuseum.ca attention: Hudson Restoration.