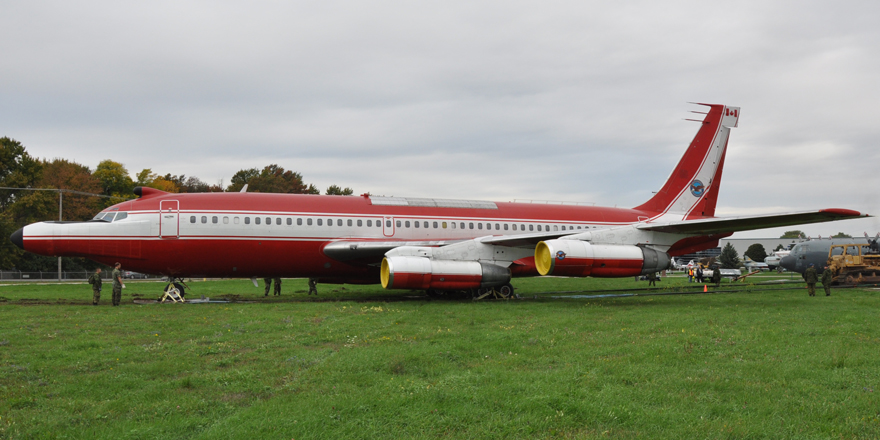 Introduced by Boeing in 1959, the 720 is a smaller capacity, lighter, medium range variant of the 707, one of the most successful airliners of the 20th century. C-FETB is the 720 flying test bed operated by Pratt & Whitney Canada until 2010.  One of 154 model 720s manufactured by Boeing between 1959 and 1967, C-FETB is the single remaining operational 720 in the world. On May 9, 2012, the aircraft made its final flight, travelling from Saint-Hubert to CFB Trenton – the last flight ever of a 720.

Eager to preserve this historically significant test bed, Pratt & Whitney Canada (PWC) and the Canada Aviation and Space Museum (CASM) came to an agreement that saw the 720 went on indefinite loan to the National Air Force Museum of Canada, in Trenton, Ontario.

Middle East Airlines (MEA), the largest airline in Lebanon, bought the airplane on Sept. 25, 1971. Re-registered as OD-AFQ, the airplane was delivered to its new owner on Sept. 30. Like many, if not most MEA airplanes, OD-AFQ was forced to stay away from its main base in Beirut when Israel invaded Lebanon, in June of 1982, and occupied a good part of the country until 1985. Based at Orly, an airport near Paris, the airplane occasionally flew passengers for Air France and Air Inter, another French airline.

Pratt & Whitney Canada (PWC) bought the Model 720B in December of 1985 and re-registered it as C-FETB (FETB as in Flying Experimental Test Bed) on Jan. 10, 1986. A series of modifications were made after this date.

C-FETB did its flight acceptance flight on Oct. 9, 1986. A PWC crew flew the airplane across the Atlantic on Oct. 12.

Known internally as FTB1 (Flying test bed 1), C-FETB was thoroughly modified for its new role between October 1986 and January 1988.

It was equipped to test a variety of engines, for example:

The following engine types were tested on C-FETB: 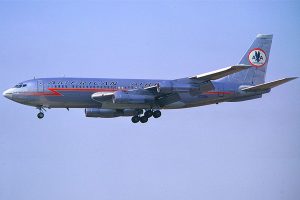 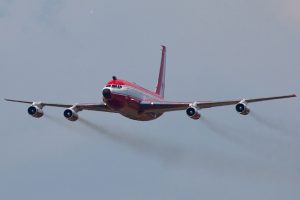