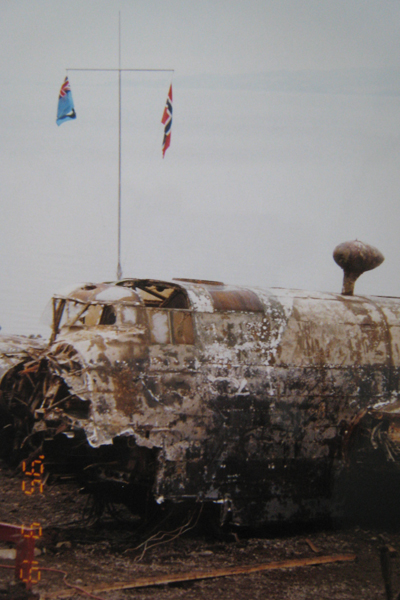 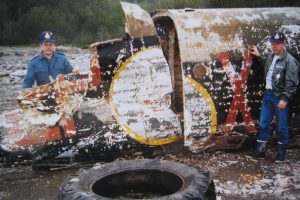 The Recovery & Restoration of NA 337

The Halifax Aircraft Association of Canada, looking for a suitable aircraft for their purpose, discovered that a Halifax aircraft, NA337, had been located in Lake Mjøsa. If it could be salvaged and restored to its original wartime condition, it would be a fitting tribute to those who lost their lives while serving their country.

Colonel L.A. Wright, the Canadian Air Attaché to Norway, and John Stene DFC and Bar, a Norwegian, arranged with the Norwegian government that full rights of salvage be granted to the Association.

The Dacon Subsea Salvage Company, who had developed a salvage plan, was awarded a contract in 1995 to raise the aircraft from the bottom of the lake. After many difficulties, caused by weather and equipment problems, the aircraft was successfully raised.

Colonel Roare Glenn, the Director of the Norwegian Air Museum at Gardermoen, arranged with the Norwegian Army to provide heavy equipment to move the aircraft onto the beach at Hias.

A team of technicians, from CFB/8 Wing Trenton, dismantled, cleaned and crated the aircraft components for shipment to the RCAF Memorial Museum for restoration. 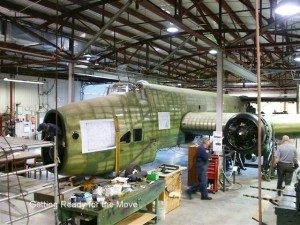 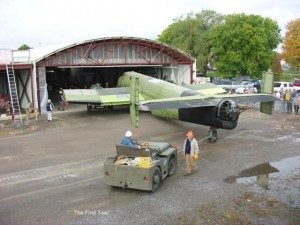 A Restoration Team was formed in July 1995. The initial group consisted mainly of Air Force veterans but the arrival of the first components of Halifax NA337 generated curiosity, interest and enthusiasm. Retired aircraft technicians, tool and die makers, metal specialists, machinists and woodworkers offered to help. Others, who were skilled in outside fields, also volunteered. They included dentists, professional engineers, opticians, police officers, carpenters and even two Halifax pilots. Enthusiasts in Scotland (Rescue 57), Holland and England responded and assisted in finding the bits and pieces necessary to rebuild this Halifax.

During the first 18 months, work was carried out in many locations, including private homes and unoccupied buildings at CFB/8 Wing Trenton. In 1996, the project was consolidated and moved into a new addition to the museum. Materials, tools and machines were acquired from many diverse sources. Some Department of National Defence organizations were disbanding or modernizing; aircraft factories were retooling or downsizing. Often, obsolete machines that were donated were of the vintage used in the construction of this aircraft; the type that many of the volunteers used during their apprenticeships. However, the team did not have all of the skills and equipment necessary and needed outside support. Units of CFB Trenton had outstanding shops and facilities and, when available, freely provided assistance.

The Halifax Restoration Team contributed 350,000 man-hours to restore Halifax NA337. They leave, as a legacy, a magnificently restored aircraft, an excellent restoration capability and a skilled and well-equipped organization which is capable of maintaining and restoring future aircraft and artifacts.